The Carnival of Barranquilla is an annual celebration that exalts the traditions and folklore of the Caribbean coast of Colombia. Long story short, it is a festival as colorful and magnificent as Holi, as big and bright as Diwali and as sacred and divine as Eid al-Fitr. If you are an Indian, the thought of any country beating you in the arena of “The Best Festivals Worldwide” is too intimidating; how can such a multi-cultural country, with almost two to three Utsavs (“ut” meaning “removal” and “sava” which means “worldly sorrows” or “grief”) every month be behind any country in this field? But sanity prevails, and one realizes the importance of every country’s own religion, culture, ethnicities, values and lastly festivals or utsavs!
To begin with, Diwali is a five day festival that represents the start of the New Year on the Hindu calendar. It honors the victory of good over evil, and brightness over darkness. Diwali celebrates the return of Lord Rama, King of Ayodhya, with his wife Sita and brother Lakshmana from a 14-year exile and a war in which he vanquished the demon king Ravana. It is colloquially known as the “festival of lights”, for the common practice is to light small oil lamps (called diyas) and place them around the home, in courtyards, verandahs, and gardens, as well as on roof-tops and outer walls. On the day of Diwali festival, doorways are hung with torans of mango leaves and marigolds. Rangolis are drawn with different colored powders to welcome guests. The traditional motifs are often linked with auspicious symbols of good luck. Oil diyas are arranged in and around the house. Talking about firecrackers, it beats the “4th of July” in the “Annual Brightness Meter” on this night, young and old, all people enjoy this part, with different types of fire-crackers everywhere, it lights up every single corner of the country. 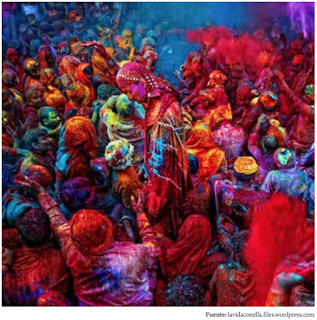 Eid al-Fitr is a Muslim festival that marks the end of the month of Ramadan, a month with long periods of fasting. This sacred Muslim festival marks the end of the Islamic holy month of Ramadan, and also, to the month long fasting. Thus, Eid al-Fitr is also known as the Feast of Breaking the Fast. It is believed that fasting throughout the month of Ramadan, gives a person a chance to win over his vices and come closer to Allah. Thus, once the month ends, the celebrations of Eid al-Fitr begin and continue for around three days. During these festivities, Muslims throughout the world wear new clothes, exchange gifts with their loved ones, and various delicious delicacies are prepared especially to mark the occasion. In India the revelry of Eid is not limited to the Muslim community, but the joy is shared by people of other faiths as well. Muslims are the largest minority of the country and a significant part of the national social fabric. Thus, all Muslim festivals are celebrated in the country with great regalia, especially Eid al-Fitr.

Holi, known as the ‘festival of colors’ is celebrated on the full moon day falling in the month of Phalguna (Feb-Mar). Various colors and water are thrown on each other, amidst loud music, drums to celebrate Holi. Like many other festivals in India, Holi also signifies a victory of good over evil. As per ancient mythology, there is a legend of King Hiran- yakashipu associated with Holi. The legend of Prahlad and Hiranyakshyap led to the tradition of burning Holika or Holika Dahan on the eve of Holi. According to the legend, there was a powerful king named Hiranyakshyap who considered himself to be God. Hiranyakshyap wanted everybody to worship him. However, against his wishes, his own son Prahlad began worshipping Lord Vishnu. With a view to kill his son, Hiranyakshyap requested his sister, Holika to enter a burning fire with Prahlad sitting in her lap. Holika had a blessing to enter fire unscathed. Legend has it that because of his extreme devotion to Lord Vishnu, Prahlad was saved while Holika paid a price for her evil desire.

The part which everyone awaits is playing with colors, water balloons and pitchkaris (water guns). Every man on the street on this day cannot be identified. As people go full guns, blazing with so many colors in their hands and pockets, every individual face has a unique graffiti of its own: mothers can’t identify their children, nor can bosses their employees.

Coming to where we started, Carnaval de Barranquilla is a space of social cohesion, of peaceful enjoyment, cultural diversity, great drawing power and social mobility gravitating around the folklore, dance, music, costumes, and creativity as the most representative artistic expressions resulting in a great party that contributes to the social and cultural development of the community. Second biggest carnival in the world after Rio, proclaimed by UNESCO as one of the Masterpieces of the Oral and Intangible Heritage of Humanity, the Carnival of Barranquilla is one of the highlights in South America. Four days of endless “rumba” that will leave you unforgettable memories. The Carnival is mostly a dance festival with theatrical and musical performances based on historical, as well as current events. Each dance, disguise or chariot has a very special meaning related to culture, history or actuality. One of the celebration’s central concepts is “la Burla”, (making fun of something or somebody). For a person from a different part of the world, it surely looks like a big feast, a time when one can forget anything and everything in life and observe and witness the beauty and magnanimity of this four day long extravaganza. For an Indian, or I would quote for anybody in the world, it is hard to categorize this mega event as some “x” festival for “y” thing. One would love to be here and one just wishes that “Carnaval de Barranquilla” starts having its own version of festivals in every state in the world. Just think about “Carnaval de India” or “Carnaval de USA”. The thought itself brings a huge, wide smile on everybody’s faces!

Al Derecho Who lives it, is who enjoys it!
Cargando comentarios...
A %d blogueros les gusta esto: